It is a fashion these years to force “open” chakras and follow western type beliefs about this issue. People certainly miss common sense when they follow these rules and beliefs about which chakra center relates to what abilities. The most common is the Third Eye chakra on which I already wrote my opinion here.

The main problem is that this is just a fraud thing. Ok, mostly. If somebody tries to sell you a book, digital product or a class, chances are you have been fooled already. But what about people who truly initiate something with overstimulating these energy points? Here skeptics tend to be more curious about, now what is real then?

It is real and it is not lol. It depends on perception. Be aware that human nature is prone to nice beliefs and fairytale thinking and many people just want to believe in this or practice it. Be aware that people who are promoting chakra stuff with all the nice stories and abilities, sucking gemstones are not credible people and many times insane. They are big believers and they want to feel special in their life.

Our world is full of over-objectification of everything. It is not enough that we “have” chakras but they have colors, frequencies, abilities, attributes, etc. This is insane but they are real to a certain degree as you will read about it below. I will try to explain the whole thing.

We have a physical body but the vast majority think they are IN a body. Well it feels like it, we got used to it, see it from inside but not really. Even a mirror image is misleading, people tend to think they are that person. Your mirror image is always different from a photo about you or a from video data.

It turns out to be more real when people are fooling themselves with Out-of-Body Experiences and they get the evidence that they were in a body. Meanwhile, they fooled themselves with a belief construct. Other methods are showing people how unreal to think that we are in a body. We only use the body as a perception here and anywhere else. Okay, maybe you get the basic idea about how I try to dissolve this body-fixated thinking all the time. 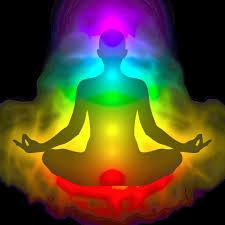 Still, there is an energetic link that is running through any parts of our body, supplying life force to keep that body alive as we are still in the physical world until a certain age. If we are done, the energetic link is cut off and we change back our primary focus to a wider spectrum of awareness into the non-physical world. If I get the Focus Model here, the returning place is Focus 3.

The Afterlife is tricky because most are victims of their own beliefs. Post-humans tend to stay the same as before until they realize that they are not human. Be careful about your beliefs or perception. If somebody tells you he/she can see auras or read them, it doesn’t mean a thing, only to that person. You gather data from the non-physical which is right there where you are, you just didn’t learn to focus “there”. We are not physical at all.

So what about those chakra centers?

Still, people will question it, is it real or not when we are talking about chakras. It is real to a certain degree. Look at this way, it is a fraud thing but meanwhile, it is real. For example, you can ignite on or overstimulate certain ones with meditation.

Those energy centers are there but not because they are chakras but because energy flows through your body. A bird or a cat with a smaller body won’t have this same nonsense chakra system. If somebody can see your chakras, it means only that some person are able to gather non-physical data in a visual sense. It only means that. And not that you have 7 chakras or XY numbers of them.

People WANT TO believe in it because it is magical or they can blame or heal them. This is how our humanity works, people want to believe instead of knowing. Use common sense, we only have energy, flowing through our body. What people are doing is over-objectifying even their own physical vehicle.

What about energy raising or chakra ignition? Simply put, you are closing out the physical world to a certain degree and concentrate your thoughts onto that certain body point. Some will cause buzzing, vibrations, warmth, floating, expanding sensations, etc. Your attention will do the job with the intent behind it. Same on healing.

People tend to think from mystical distortions that they have closed chakras and they need to force open it like a third eye. Just don’t. It will cause trouble and you don’t know a thing about what you try to do. These are metaphors.

So, if we try to put it another way, chakras are metaphors of different “abilities” (not ESP ones) of our personality or body. Whatever we call it, for example, Astral Projection rarely happens with chakra stimulating. If it does, it was for other reasons or from the person’s beliefs may be.

There are a hundred ways of working with them but it has no purpose on anything. You try to work on a symbol or representation of yourself. If somebody wants a special ability, it takes time to be open for it, not through overstimulating an energy center. If it happens, then your intent did that. We need balance in energy as in physical health.

We have this energetic connection that keeps the physical body alive. It still does its job with the brain on autopilot, when we are sleeping and our consciousness is in other realms. Even if billions are not even aware of this fact. And I can support this with personal non-physical experiences.

If somebody has energy blockages, he/she did it to him/herself directly or unconsciously by his/her mind, thinking. Then all sorts of physical body damages, blockages, and illnesses forming over time. The physical body is a buffer after our thoughts towards the external reality. Most people don’t know it and don’t care about it. This is human nature, arrogance, and fear.

What we believe is what others are saying, those stupid truths about what causes cancer, diseases, illnesses. We need to accept science, the medical industry, what doctors are saying. I don’t think this is smart thinking.

To make the energy flow freely again, mindset changing is needed and a healthy lifestyle. You need to decide to be healthy again or suffer furthermore. Well, eventually the consequences are always there sooner or later. It is you, who uses the physical body with your thoughts, emotions, etc. Those are causing the trouble basically.

So to sum this up, the chakra nonsense is real to a certain degree but they are symbols, metaphors only. If you can find them and stimulate them, then it still doesn’t mean they were real in that fashion of sense. If you see them visually, it only means that you are trying to gather non-physical data, an interpretation of what you are seeing. Or somebody who is capable of seeing them with or without colors. It is a belief system.

Some people can even see them, spinning like seeing auras with colors. These are personal interpretations. It is still not 100% sure for me, do we get them by strong intent or by non-physical assistance but everybody is free to experiment with them.

One thing is sure, people who suddenly get these abilities are always scared out from lack of knowledge. I mean extrasensory abilities. Some may get them by uncontrolled intent, running in the background like “how cool would it be if I had…”. Be careful with your thoughts.